Off it came, from the inside of the right post. Along the goal line, in at the left post. Ladies and gentlemen, we have what is known as a title race. And a proper one, now the head-to-head meetings of these teams are done. Match by match, weekend by weekend, they will fight each other by proxy around the grounds. Maybe Tottenham will chip in, too. It should be grand entertainment. Buckle up.

Manchester City are right back in it and deservedly so. They shaded this even if it was an unconventional performance from a Pep Guardiola side, more blood and thunder than tiki-taka.

The dying minutes of the match even found him channelling his inner Klopp, imploring, gesturing to the crowd to make more noise and get behind the team as they regrouped to repel a fresh barrage of Liverpool long balls. When the danger finally passed, and a goal kick was awarded, there was none of that highbrow playing out to the full-back. Ten blue shirts headed upfield and Guardiola ordered Ederson to kick as long as he could. And that man can kick. 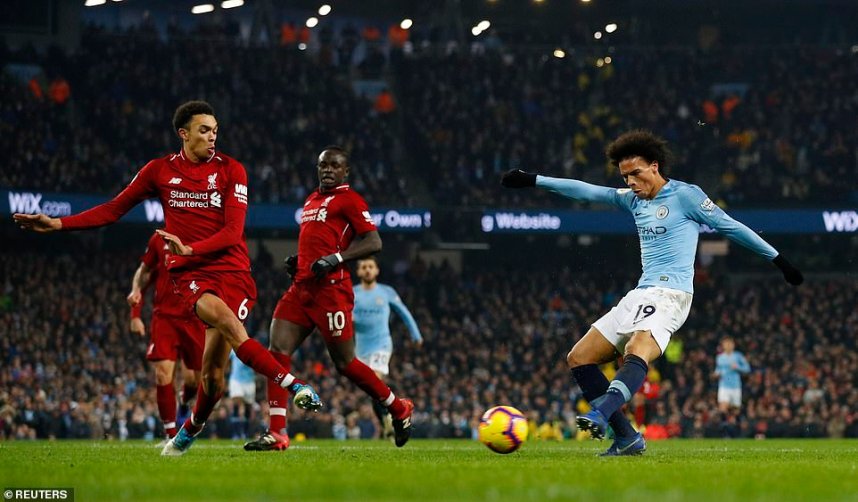 So all’s well that ends well, certainly from the point of view of Manchester City and any neutrals.

It may still be that Liverpool win the league. They continue to look the best team in it, even if Thursday night’s display was uncharacteristically skittish in moments, with passes going astray and nerves apparent.

Yet this may have dented their confidence and means they cannot afford to tinker greatly with their domestic selections, even when the Champions League reconvenes.

Others will be brimming with confidence again, after recent setbacks, too – not least matchwinner Leroy Sane.

Just at the point when Liverpool looked to have triumphed – not with victory, but with the draw that would keep City at arm’s length – he intervened.

As it stood, with the score at 1-1, Liverpool were on course to maintain their seven point advantage. Seven points is a hefty margin, even in January.

It would require City to stay unbeaten and Liverpool to lose two, maybe three games when they were yet to surrender one, coming here. Sane cut a hole in that safety net after 71 minutes, slicing Liverpool’s lead to four points. Still a decent gap but far from comfortable. All it might take is the odd slip or two. And Thursday night was a slip, have no doubt of it.

Liverpool were second best for much of the game but, having equalised, they looked capable of holding out. It was then that Raheem Sterling ran the ball crossfield and picked out his team-mate, Sane.

He made a good angle, saw the opportunity open up and struck a low left foot shot towards the farthest corner. He could not have been more precise. It was a winner worthy of the occasion. City’s performance was worthy, too.

Yes, they remain defensively vulnerable. Liverpool’s equaliser was a classic example of the frailty that has left Guardiola’s champions playing catch-up this season.