Back on October 9, with a very special ‘V Live’ broadcast, SHINee’s Main greeted fans, commemorating his official return from his mandatory military service!

Key spent time talking about his military service experience during this show, mentioning all the food he wanted to eat while staying at the military base, and doing stuff he wasn’t allowed to do under his superiors!

Key’s good friend Changsub of the BTOB, who worked at the same military base as Key, also joined as a guest.

First, during his military service, Key listed the top 5 meals he wanted to eat the most-# 1 being sashimi, # 2 being yeopgi tteokbokki, # 3 being honey chicken, # 4 being grilled pork belly, and # 5 being ice cream. Then, Key and Changsub wanted to spend some time doing all the food mukbang!
The twist, however, came when Main, who is typically bad with spicy food, almost lost his sense of taste from the spicy tteokbokki yeopgi!

As time went on, the intense spiciness of the tteokbokki could not be managed by both Key and Changsub, their tongues getting all twisted from the spice attack. In the end, Key did not eat the other things he wanted to eat, such as sashimi and grilled pork belly, and after a while, the ‘Baskin Robbins’ ice cream dissolved into puddles.

After spending some time eating and chatting, Key talked about one thing that he desperately wanted to do which he wasn’t allowed to do in the military – putting his hands in his pockets!

To enjoy his freedom from the military to the fullest, Key and Changsub got up on their chairs to pose with their hands in their pockets:

Later, when it came time for Key to answer fans’ questions, one fan asked who he would rather have as his superior in the military between Taemin and Minho. After complaining a great deal, Key finally chose Taemin as the lesser evil.

When it came time for Minho to “turn his phone in” and return to his duties, Minho said, “I really need to turn my phone in now… ha… Do a good job the rest of the broadcast, and congratulations on your discharge!!!! Take care of your health!!!”

Seeing the comment, Key demonstrated just how “touched” he was by Minho’s encouragement by swiping away tears(?) with some decorative flowers. 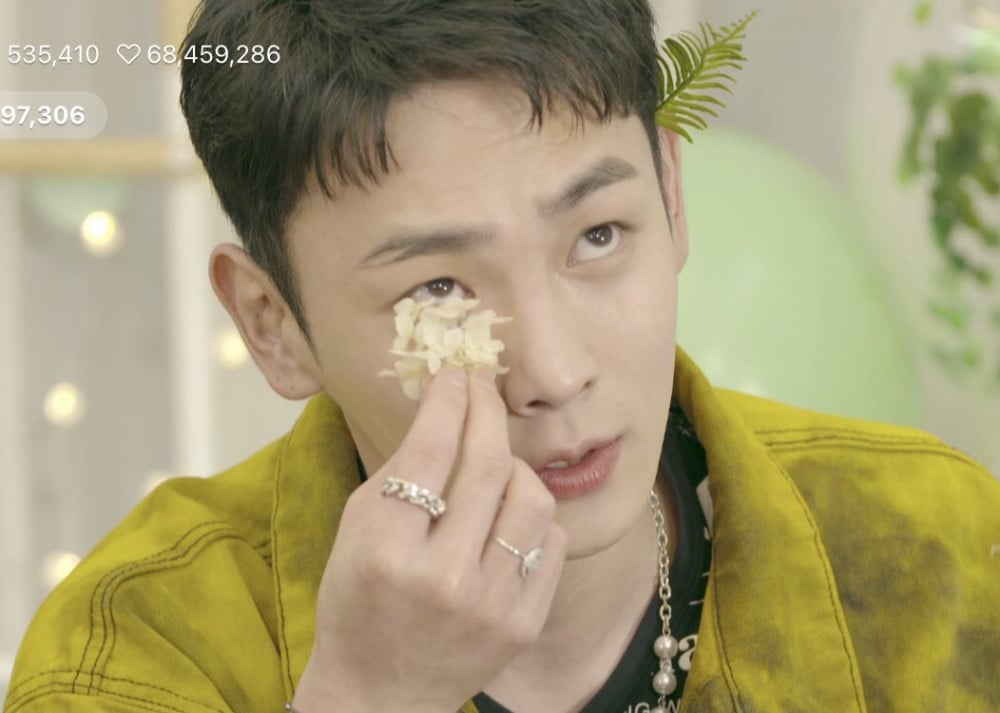