N’Golo Kante is looking forward to playing alongside Christian Pulisic next season following the latter’s transfer to Chelsea.

On Wednesday morning it was announced that the 20-year-old will be moving to west London this summer in a £58million move from Borussia Dortmund.

The American international is Chelsea’s third-most expensive signing in history and will be expected to help the Blues deliver on the biggest of stages.

Despite his age, Pulisic has made over 100 appearances for Dortmund so far – proving a key member of the squad during his four years in Germany.

And having watched Pulisic’s impact from afar, Kante can’t wait to see it close up next season.

‘We know he’s a good player,’ he told Sportsmail following Chelsea’s 0-0 draw with Southampton in the Premier League on Wednesday night.

‘He’s doing well for Dortmund and we are glad to welcome him to Chelsea.’

The impending arrival of Pulisic highlights Chelsea desire for more attacking options – which was further underlined by their disappointing goalless draw in midweek. 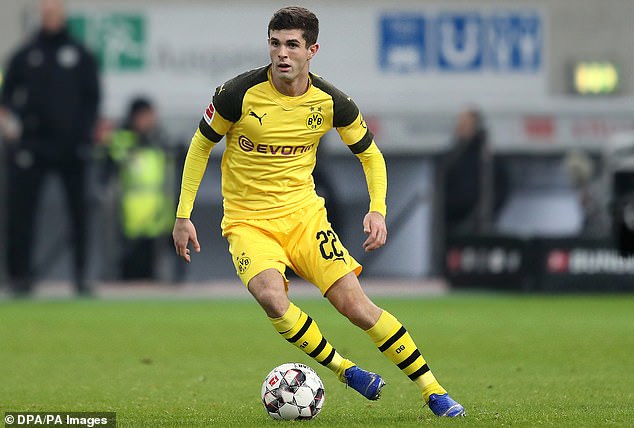 It’s the second home league game in a row which Maurizio Sarri’s side have failed to score in, following their 1-0 defeat by Leicester on December 22, but Kante thinks they were just unfortunate against Southampton.

‘It was a little bit difficult,’ he reflected on the Saints’ defensive tactics. ‘We didn’t complete our objective at home.

‘We played against a very compact Southampton team, we had some chances but we didn’t score. I think we defended very well in this game.

‘We tried to keep the ball in the first half, in the second half we continued with our plan.

‘We had more spaces and we tried to find a way to score but I think we missed some chances, the keeper made some saves and they fought until the end and got the point.’